Golfer Geeks is a community-supported website. We may earn a small commission on purchases made through our links. Learn more.

The name “Ben Hogan” is synonymous with precision, perfectionism, and exacting standards. Ben Hogan irons, golf clubs and the  Ben Hogan Golf Company would certainly be no different.

The Hogan Golf Company was formed in 1953 in Ft. Worth, Texas.

More recently, Ben Hogan Golf was purchased by Callaway Golf in 2003 as part of a deal for buying Topflite Golf. The company was later sold to Scor Golf in 2011 and remains in the hands of Scor.

The brand relaunched in 2015 with the creation of two brand new club lines, the Ft. Worth 15 irons for the better player and the PTx irons, also for better players. (Both discontinued)

At that time Hogan golf also offered the Ft. Worth Hi irons, VKTR hybrids, and the TK wedges.

Soon after followed the PTx Pro and Icon irons.

I have a little personal history with the 1980’s version of the Edge irons, as intermittently borrowed them from my uncle along with a set of Ping Eye 2’s from a friend. I liked the Edge irons fine, but I loved the Pings. 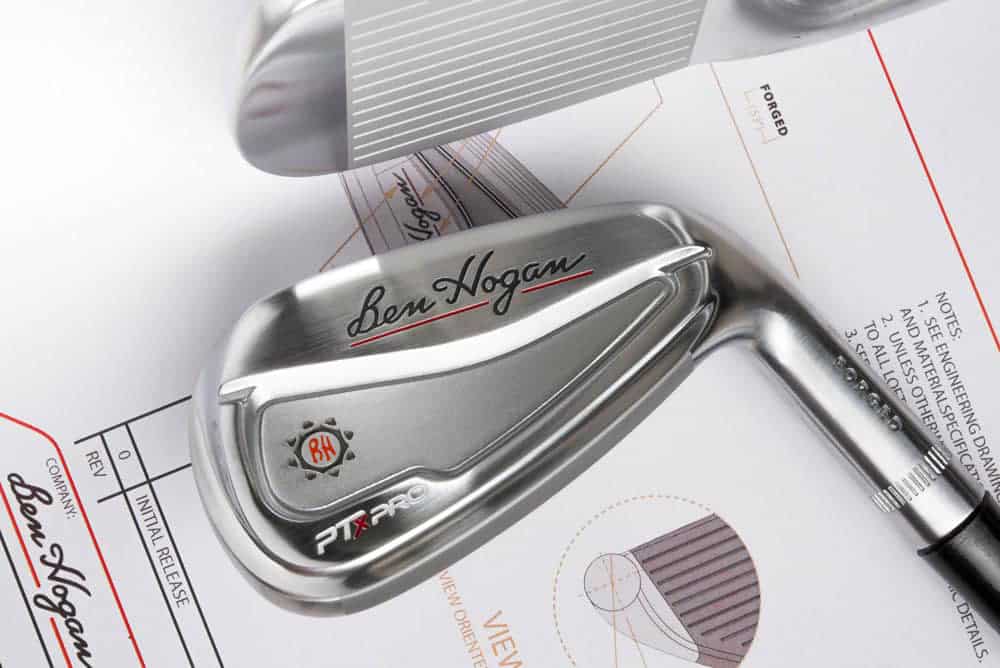 The most player-friendly "Player" irons from Hogan yet. They combine the best performance attributes of player irons with enough forgiveness to let the 10 or 11 handicap in. I found them a joy to play with. 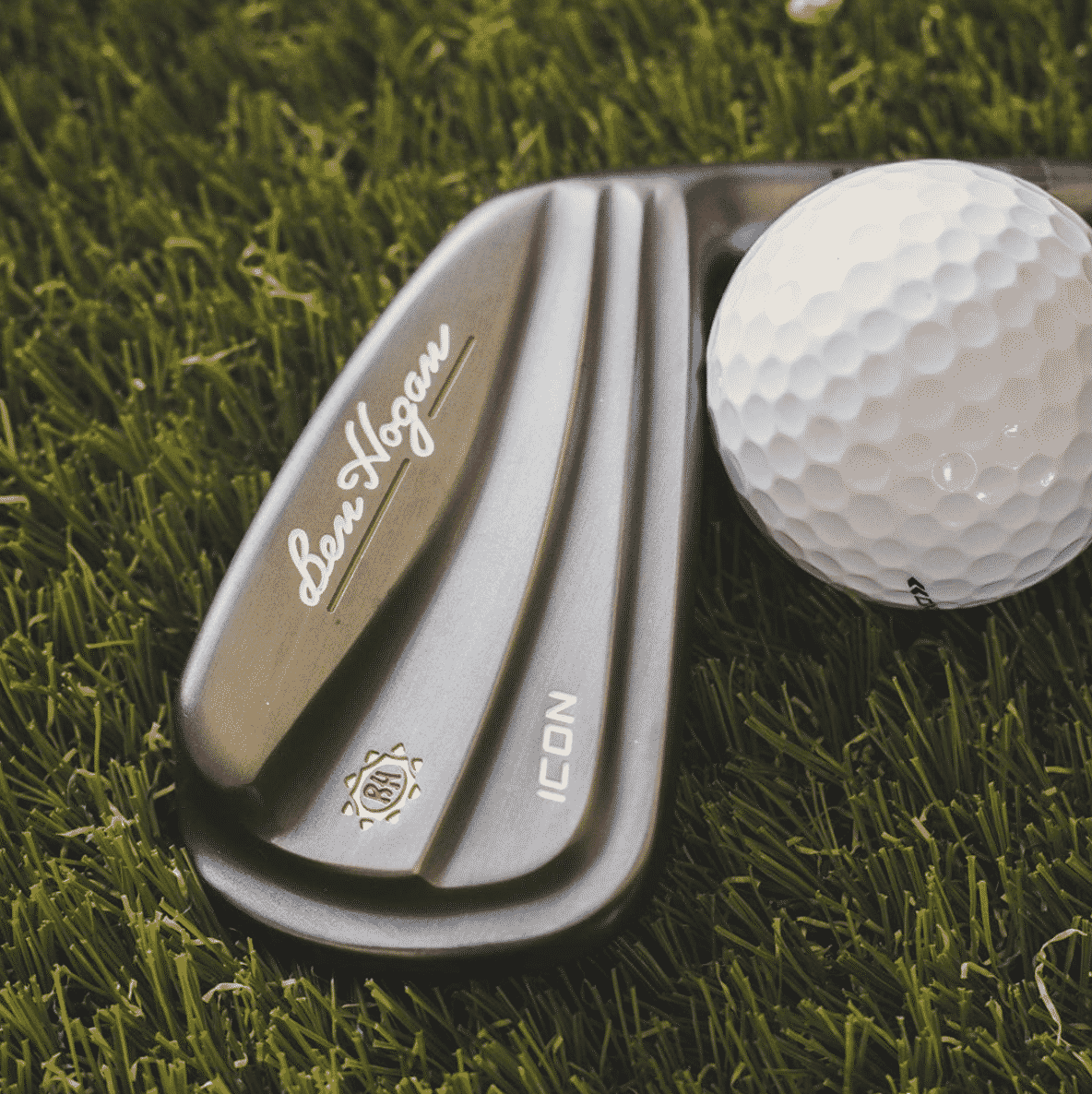 The Icon Irons are the closest things to blades without being blades...If that makes sense.

They are precision instruments that offer all the performance better players demand WITHOUT sacrificing distance. (Much to my surprise)

You could try them yourself by taking advantage of the Demo Program...Some patience and persistence will be required. The Icons are in demand.

You can click the link below to Buy or Demo

**You can check out my 2018 Edge Irons Review in these very pages.

The new EDGE irons were released in 2018 and are an updated version of the Edge irons released 30 years ago, of which I’m fairly familiar.

This is the “game-improvement” iron offering from the new Hogan Golf company. They are forged, like all Hogan irons, but are packed with technology to minimize the mis-hits we hackers are known for.

THE SMARTEST HEAD IN GOLF: Perimeter weighting is achieved with a two-piece construction.

LARGER FACE AREA – MORE OFFSET – THICKER TOPLINE: These serve the exact function you would expect them to- more forgiveness for the less accomplished player.

ENHANCED V-SOLE TECHNOLOGY: This is the same modifications noted above. The leading edge now has a higher bounce and the trail edge bounce has been softened as compared to PTx and Ft. Worths.

SIMPLIFIED PRECISELOFT SYSTEM: They come only with the “mid-high launch” profile- the most popular profile of Ben Hogan iron customers. And, as previously stated, there is the standard 4* loft gap between clubs.

The Black’s are the latest clubs released from the Hogan brand. Like the original Ft. Worth’s they are simply gorgeous, but there are other differences besides the obvious color change.

This newest edition is still targeted at the better player; they are still forged blades. They have been updated to be just a tad more forgiving. I’ll get to the details below.

PATENTED BLACK DIAMOND METAL FINISH for both durability and glare mitigation. This is what Hogan calls their proprietary new finish. They claim it protects the Ft. Worth clubheads up to 7-times longer than the nickel-chrome finish used on their other lines of clubs. This extends the effective playability of the irons. Groves stay sharper, allowing players to impart more spin which allows them to shape and flight shots and hit and hold more greens. The black finish also helps to “frame” the ball better due to the extreme color contrast, making it easier to align correctly to your intended target and increase the accuracy of your shots.

OPTIMIZED WEIGHTING SYSTEMS: They have made the irons more forgiving with a couple of minor tweaks to the original design. The “Depression Cavity” which first appeared in the Ft. Worth irons in 2015 has been modified in shape, size, and depth in 2018 for better shot making. The cavity is larger in the long irons to increase launch angle for better holding of greens and the perimeter weighting system has been tweaked in the short irons for better feel.

MODIFIED V-SOLE DESIGN: The V-sole has been optimized for each club in the set by strengthening the leading edge in and reducing the trailing edge in certain irons.

SIMPLIFIED PRECISELOFT SYSTEM: Gone or the four launch profile options. Due to feedback from existing customers, the “mid-high launch profile” is the only one available. The 4* loft gap between clubs is maintained.

VKTR hybrids were introduced in 2015 and updated for 2020 and feature some unique technology and designs for better performance than your standard hybrid.

Hogan is attempting to help the hybrid come into its own, not just be kind of a long iron or kind of a fairway wood.

UNIQUE SHAPING: These hybrids vary in Size and Shape depending on the loft. The lower lofted clubs are larger to instill more confidence at address and allow the engineers at Hogan to place weight where it’s needed most. The highest lofted hybrid at 27* is 96cc and the lowest lofted club at 17* is 110cc. They’ve moved more weight behind the impact area to enlarge and optimize the hitting area on the face.

PERIMETER SHOT SHAPING TECHNOLOGY: There are 4 movable weights in the clubhead totaling 24 grams to help optimize trajectory and accuracy. You can dial in whatever shot shape you desire.

ADVANCED V-SOLE TECHNOLOGY: This technology has been borrowed from their irons and serves the same purpose- to enhance turf interaction from any type of lie.

You can demo or buy by clicking the button below

**Note: These clubs are in demand, so demos will be hit and miss. 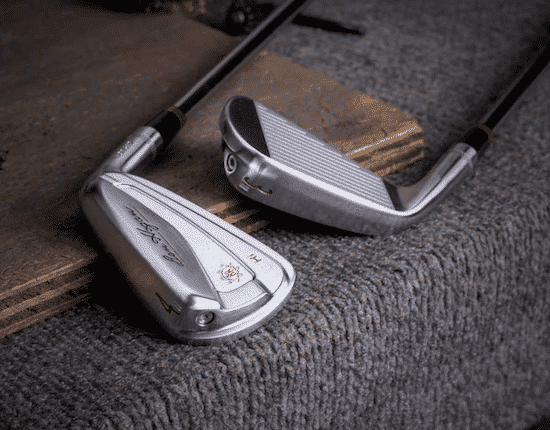 This is Hogan's attempt at making a forgiving and confidence-inspiring long iron.

Hogan contends (as do I) that the key to hitting quality golf shots, especially with long irons, is Confidence. Or at least one of the keys.

The confidence you get from looking down at your ball at address and seeing that club head cradle the ball just so. And Not wondering how in the world you are going to make decent contact.

You can put your normal swing on it and get a decent result. No over-swinging. Not rushing your tempo to squeeze out extra yardage.

Also, the heads are designed to look bigger than they actually are...Just crazy enough to work, maybe.

I am yet unable to get my hands on them. Hogan is to slammed with backorders for paying customers.

Multi-Material Forged Construction: The frame of the club head is made of soft 1020 carbon steel. Hogan says this allows them to make the club head larger with a deeper cavity. With this, weight is optimized around the perimeter and CG is deep and towards the rear of the club.

The face is made of exceptionally thin MS300 carbon steel which allows weight to be allocated elsewhere in the club head for added forgiveness.

Click below to buy or demo your own UiHi irons...

“Equalizer” is the nickname Ben Hogan’s competitors gave his pitching wedge back in his heyday because of his proficiency with that club.

Hogan surmised there was too much weight in the sole of the club and the faces were too thin, leading to inconsistent performance.

PRECISION MILLED FACE AND GROOVES: They’ve taken the “grooving” of these wedges right up to the limits allowed by golf’s governing bodies. The groves are milled into the fave after forging and apparently, this process creates more texture between the grooves for EVEN BETTER spin and performance.

ENHANCED V-SOLE TECHNOLOGY: Yep, you guessed it. The leading edge is now more severe and the trailing edge has been softened to produce better turf interaction from various lies.

“Engineered for accuracy. Forged for feel.” That’s the promise they are trying to deliver with these wedges. Hogan says these are built to perform on full and partial shots, as well as handle any shot around the green for the ultimate in versatility.

INNOVATIVE WEIGHTING: They have taken some of the weight from the sole of the wedge and distributed it across the back of the clubhead allowing for more penetrating trajectories on full swings and better distance control. Flighting these wedges down is supposed to be much easier than with standard wedges, but effectiveness with partial shots is maintained.

FORGED: TK wedges are forged from 1025 carbon steel for excellent feel and performance

V-SOLE: The same Preciseloft system used in other Hogan irons. The leading edge is designed with more bounce and the trailing edge has less bounce for better turf interaction

LOFT-SPECIFIC WEIGHTING: Mass is gradually redistributed to the heel, toe, and higher in the clubhead as you move from higher lofted wedges to the lower lofted wedges. This is to help optimize trajectory and distance control.

PRECISELOFT SYSTEM: These wedges come in every loft from 48 to 63 degrees.