These are blades and behave like blades. Perfect strikes go high and far 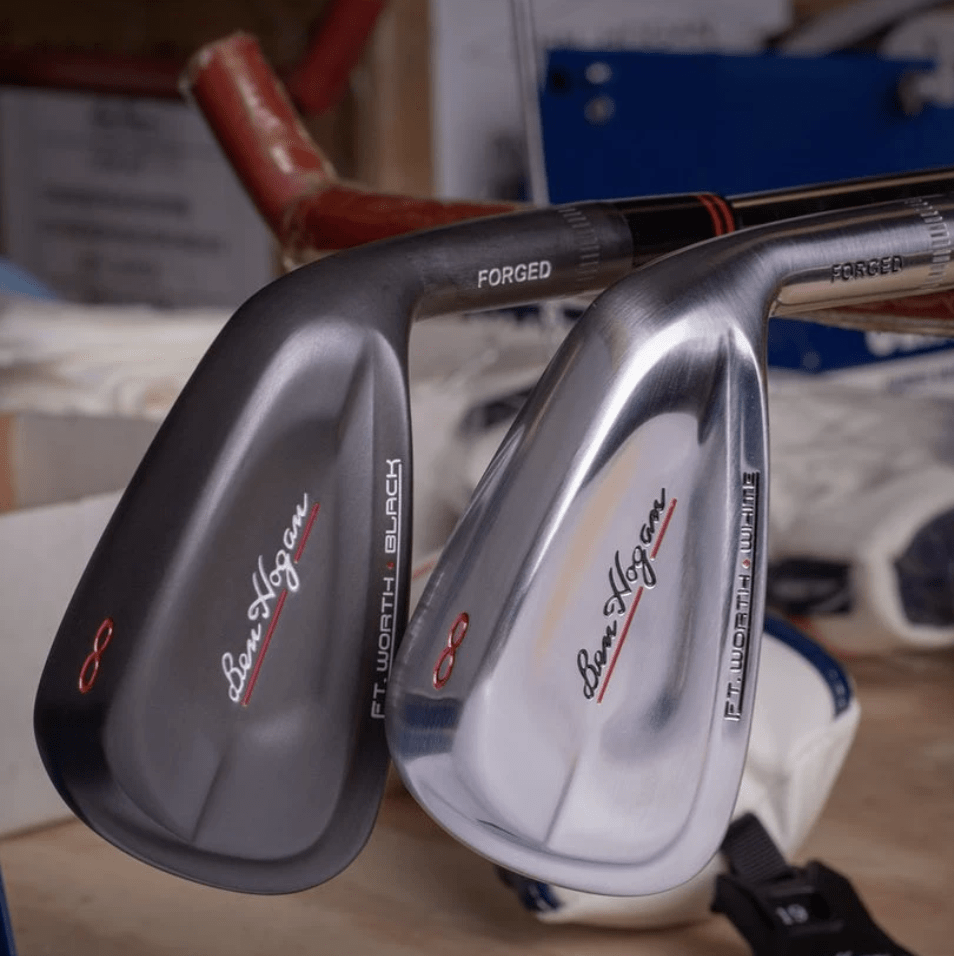 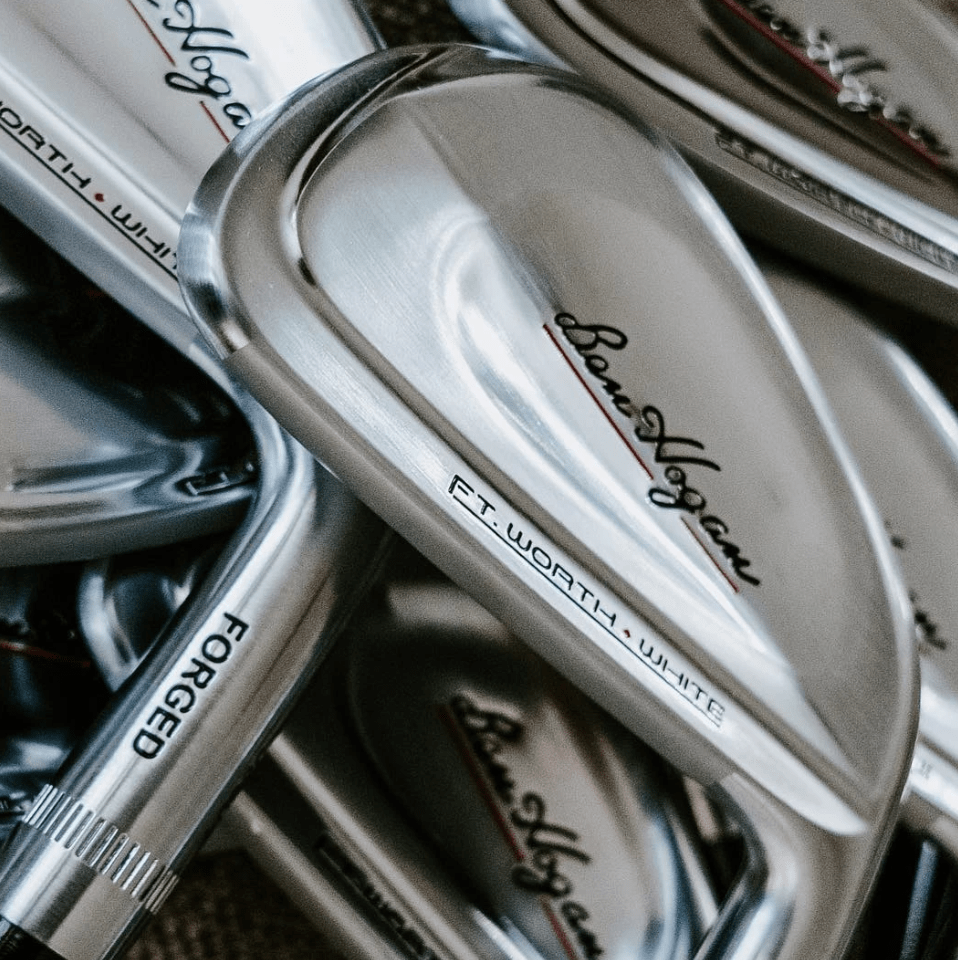 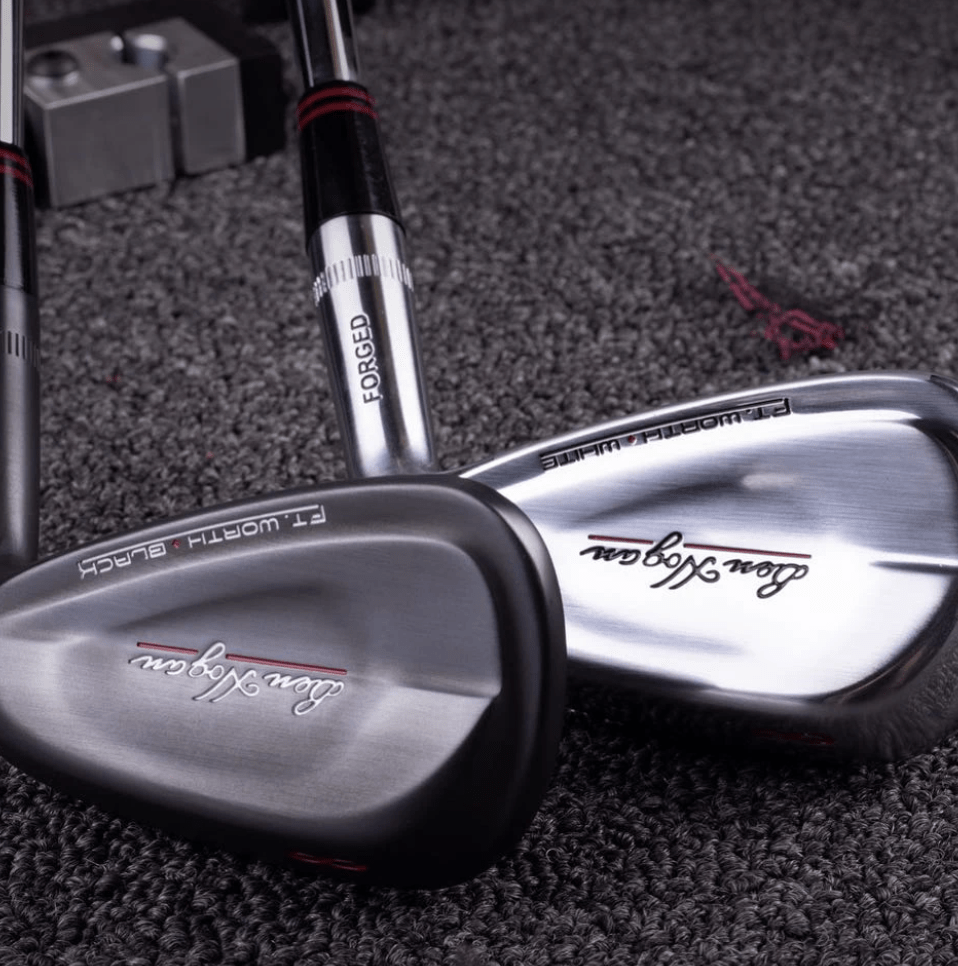 Thanks for checking out my Ben Hogan Ft. Worth Black and White Irons Review.

The Ft. Worth Blacks have been out since the beginning of 2018 and I’ve been itching to get my hands on them for my official review. They started offering demo irons only recently,  and now, the Ft. Worth White Irons join the party.

If you are a fan of Hogan irons, this has to get you a little excited. The Ft. Worth Irons you’ve come to know and love now come in black and the original nickel finish (now called “white”)

The Blacks are the “flagship” irons for the Hogan Golf brand now and, along with the Whites, are the Updated version of the original Ft. Worth 15 irons introduced in 2015.

They’ve taken 3-years of feedback from customers along with advances from extensive testing to improve on the already impressive first iteration of the new generation of Hogan blades.

The Whites and Blacks are serious blades for serious players.

Don't get me wrong, they are more forgiving and hotter than any other blades I've tested, but they are blades, so beware.

Low Handicap: If you gotta have a blade and forgiveness doesn't concern you. These may be the clubs for you.

You gotta try the demo program if you have any doubts. 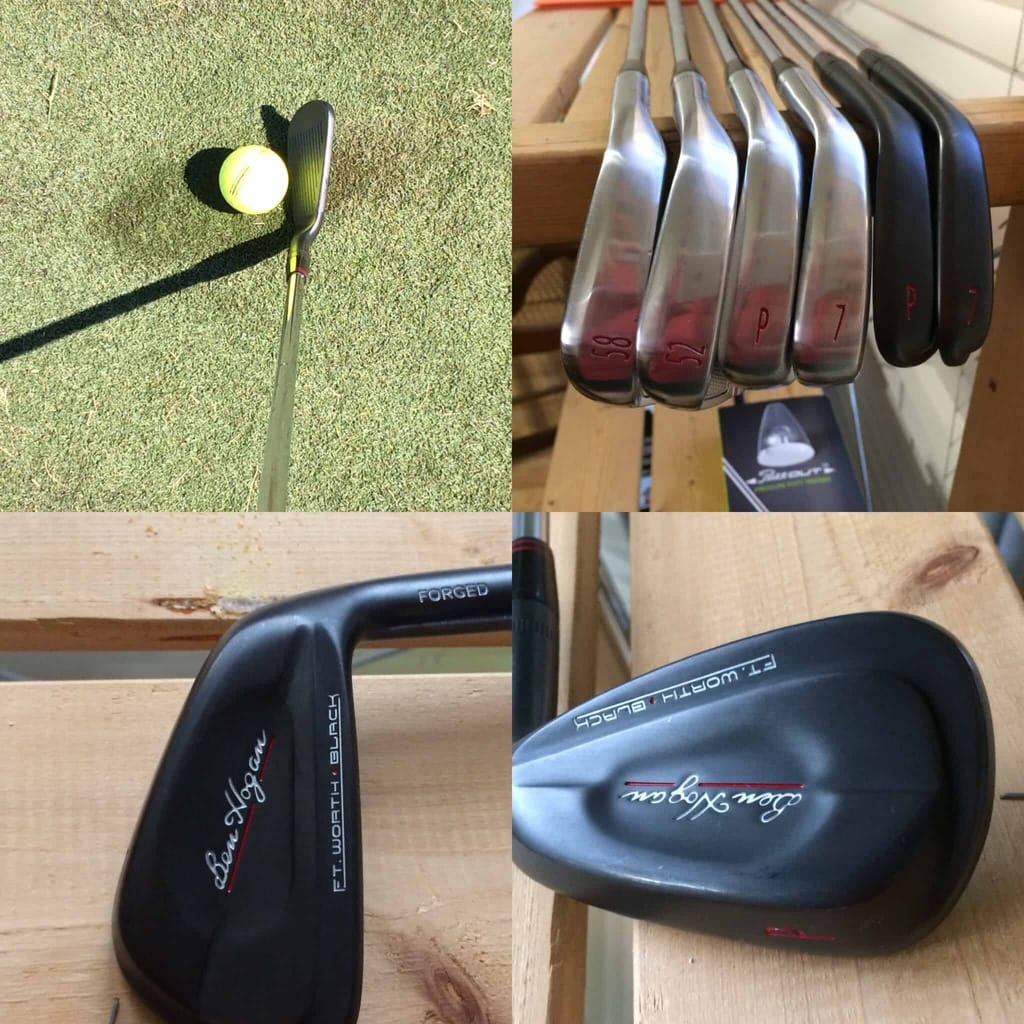 Testing The Hogan Ft. Worth Irons

On The Range: 4 Sessions and counting

On The Course: 2 Rounds and counting

My method of testing: I’m usually hitting 2 buckets or 100 balls or so during my range sessions. I try to adhere to 3 shots with the Blacks and 3 shots with the Edge irons and mix in my own wedge and 7 iron every now and again. I feel this give me he best chance to compare apples to apples.

What Surprised Me: Distance. The blacks are long. Shot for shot, the pitching wedge and the 7-iron from the Blacks, Edge irons, and my Callaways went the same distance and looked the same doing it.

Solid contact with the pitching wedge from each set is not an issue and the trajectory and distance look identical for with the Blacks, my Callaways, and the Edge irons.

The Black 7-iron takes a little more discipline for me to hit well, but marginal shots aren’t punished as much as I thought they would be. When struck well, the Black 7 goes as high and far as the other two in the test.

What Didn’t’ Surprise Me: Blade irons are a Lot harder to hit and more intimidating at address…but, not that much more with the Ft. Worth Blacks.

Technical Information, If You’re Into That

In addition to looking AWESOME, the new black finish is supposed to actually perform a couple very important functions.

Most obviously, having a black gunmetal-like finish on a club helps reduce glare when playing on bright sunny days. My old Cleveland 588 wedge “had” the same finish. The face didn’t stay that way for very long.

The contrast of color between the black clubface of the Ft. Worth Blacks and the ball actually helps players frame the ball better and increases the accuracy of their shots- reportedly.

Secondly, and maybe even more importantly, the Diamond Black Metal finish protects the clubhead and clubface up to 7-times better than the original nickel-chrome finish on the original Ft. worths.

This results in the grooves staying sharper longer and also reduces nicks and scrapes from clubs banging into each other in your bag or hitting rocks and pebbles and such during play.

As a result, you have extended the effective playing life of your clubs.

The Dynamic Progressive Weighting System is dialed in even further in the Blacks to create even more precise trajectories.

Long irons achieve a higher trajectory to hold greens and short irons have a lower trajectory for increased accuracy. The long irons are just a bit larger than the original Ft. Worth 15’s for added forgiveness and a little weight has been moved to the center of the clubface on the shorter irons for a more solid feel.

The V-sole technology remains, but it too has been tweaked. Player and robot testing revealed that the leading edge could be made stronger- so they did that – and the trailing edge bounce could be reduced- so they did that too! (Note* I’m not 100% sure what these two things mean)

The Precision Loft System Hogan introduced back in 2015 has been simplified in this new model. They found that the vast majority of purchasers of their irons prefer the “mid-high” launch option, so that will be the only option for the new Blacks and thus are stamped with traditional numbers on their irons.

No more actual lofts will be appearing. What remains is the exact 4* difference between lofts. By comparison, a typical competitor will have lofts varying from 2.5* to 5* from club to club.

If you are SURE you got the the game...These are fine blades.
If you Really want the look of blades, but with a ton more forgiveness...I can suggest the P790s from Taylormade. You won't be disappointed. 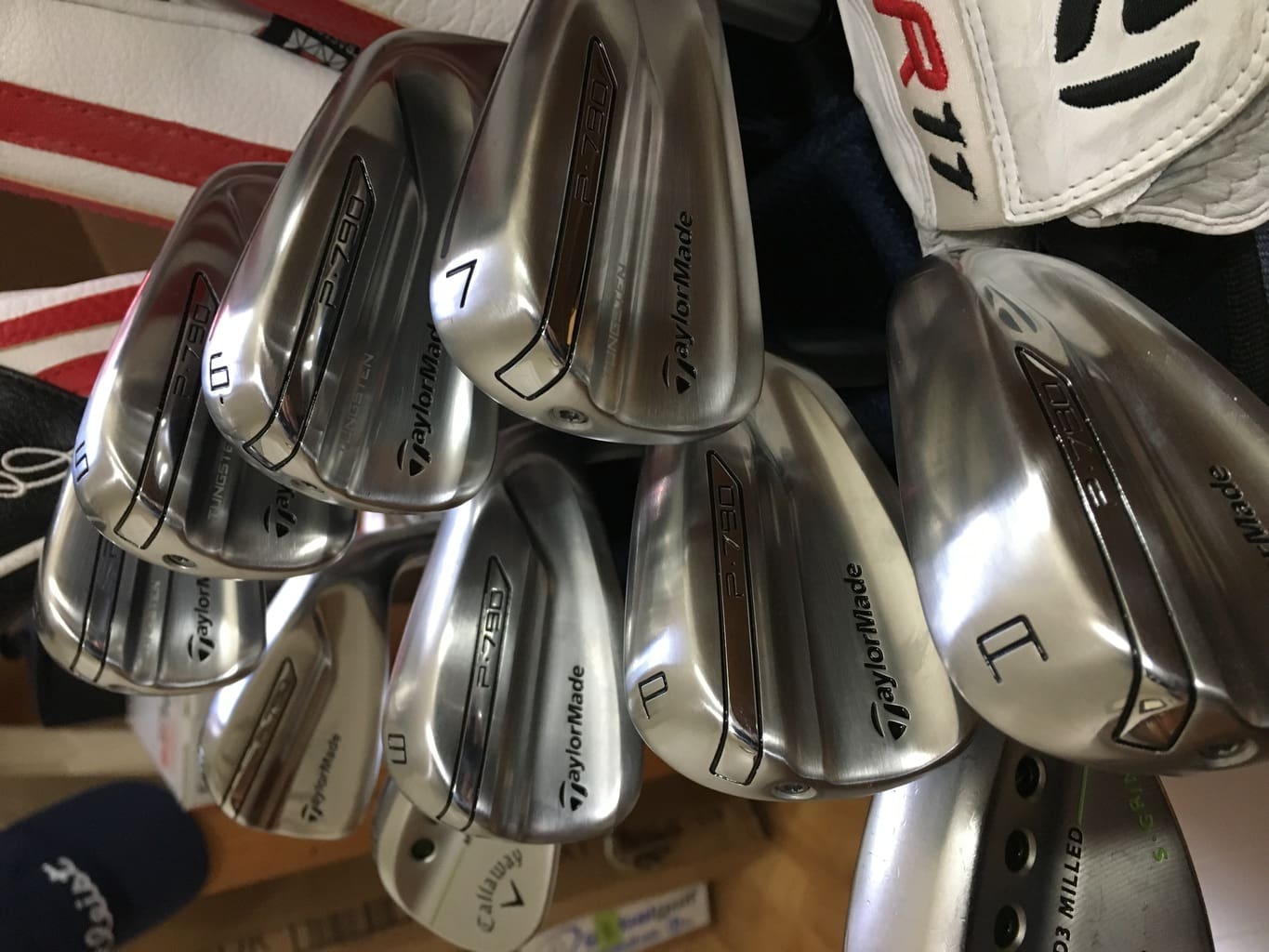 Start Playing Golf The Way It Should Be Played