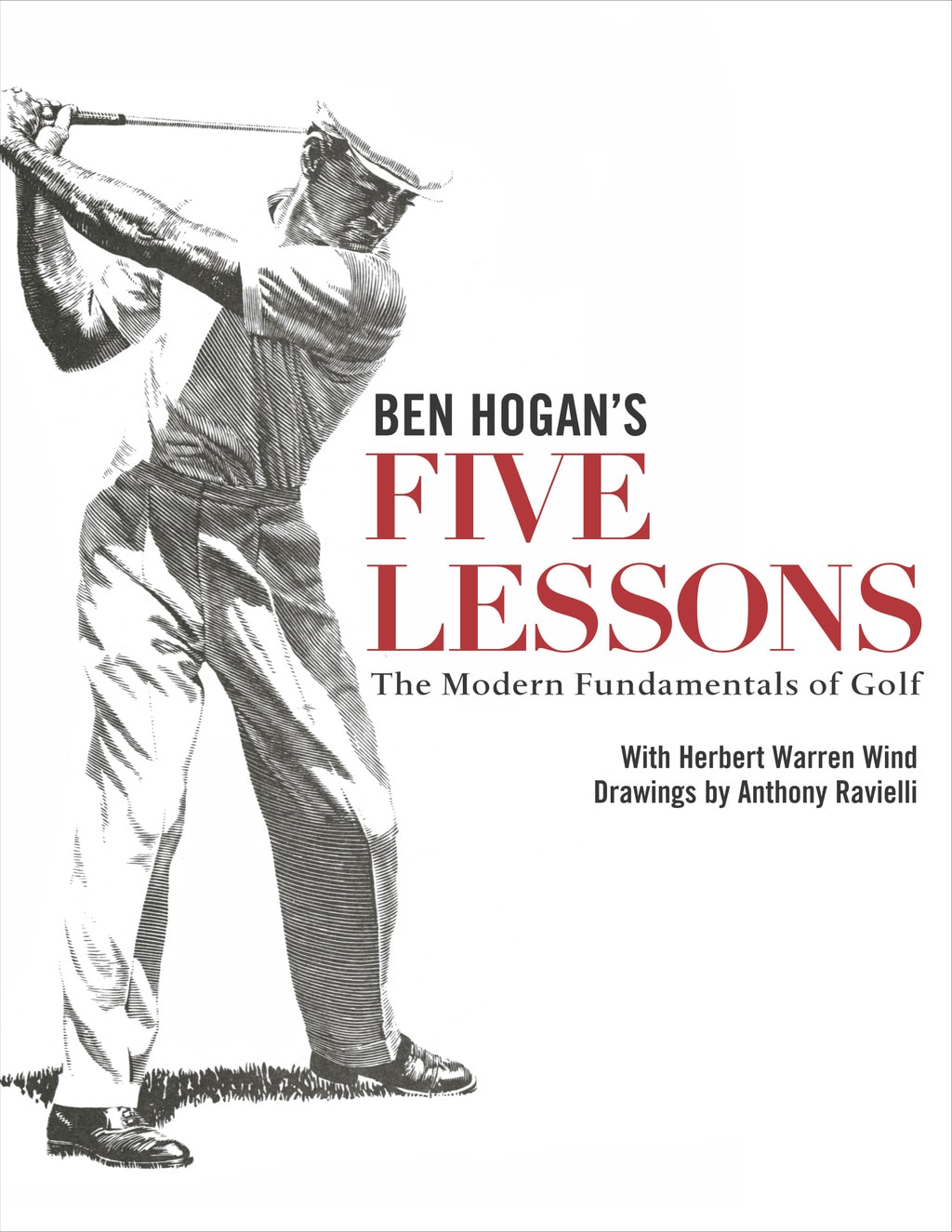 The very first thing that grabs me about Ben Hogan’s Five Lessons The Modern Fundamentals of Golf  is the front cover. (Of course dummy)

No, I mean it. It’s an image of Ben Hogan at the top of his backswing.

I look at it, and I think, “If I could ever get in that position, I could make any golf ball do darn near anything I want it to do anytime I wanted it to do it.”

It’s so classic, so perfect, so stable, so simple, so so so so…you get the idea. I want that! And I think you should too.

The next thing that struck me was his absolute belief that

“THE AVERAGE GOLFER IS ENTIRELY CAPABLE OF BUILDING A REPEATING SWING AND BREAKING 80... If he learns to perform a small number of correct movements and conversely, it follows, eliminate a lot of movements which tend to keep the swing from repeating.”

Those capitalized letters are exactly as written in this book, and he states this belief in slightly different ways a couple more times in the book. I can’t tell you how heartening it was to read that from Ben Hogan.

The foreword of the book is written by Nick Seitz, Golf Digest editorial director, at the time.

A Hogan “Secret” is given away right there in the foreword and is mentioned no other place in the book. I imagine because it isn’t specifically a fundamental- which is what the book focuses on exclusively.

“I rolled the face of the club open away from the ball. That cupped my left wrist. Coming down, the face was moving so fast I couldn’t turn it over and hook. I was rotating the club like a baseball bat, and the faster I could rotate it, the more distance I got. Training myself, I would roll the face open as fast and as far as I could. With this technique, I could hit the ball straight and far.”

Mr. Seitz goes on to say that from then on, Ben Hogan “was without peer as a shotmaker.” I believe him.

The title of the book is slightly misleading regarding what you can expect in the book or at least how many fundamentals there are- 4.

I’m obviously not going to give the Five Lessons here, but I will touch on each and try to give you some insight into the book.

Ben Hogan has an opinion on not just where every finger should be placed on the club, but on how much pressure you should be feeling in each finger.

But not to worry, his explanations are excellent, as are the accompanying illustrations. He goes into great detail and gives the reasons behind his choice and recommendation.

He used and recommends the “Vardon” grip in the book, also referred to as overlapping grip.

It was the most popular grip at the time, and a long time before that.

I believe the most popular grip today is the interlocking grip, the one I go with and is promoted in his book “The Lesson Tee.”

The Ben Hogan recommendation for getting used to the proper grip:

“PUT IN 30 MINUTES OF DAILY PRACTICE ON THE GRIP. LEARNING THESE NEXT FUNDAMENTALS WILL THEN BE TWICE AS EASY AND TWICE AS VALUABLE.”

I’ll include another example where he offers encouragement to the everyday golfer:

“I want to stress again that intelligent application is required to learn the golf swing, but how self-rewarding this application is!

The average golfer will finally learn how to put all the elements of the swing together. He will be able to repeat that swing and to hit shots that have the same basic character as a professional’s because he will be using the same method a pro does…..

And he will be hitting correctly executed golf shots, with real character to them. That is something a lot of people have never experienced, but it is entirely within the average person’s power.

I cannot emphasize this point too strongly.”

Hogan writes that those that think of that our golf stance only serves as a way to align to the target in preparation for hitting the ball. He believes the stance serves three purposes:

These are but a few, with many more in this chapter. I want to stress again, how much of an easy read this book is and how perfectly it makes sense when reading his words.

Lesson 3: The First Part Of The Swing

The concept of the “Plane” governs the success of the backswing, but it all starts with the waggle.

Hogan says this part of the swing begins at address and ends at the top of the backswing.

He pays particular attention to the waggle and calls it “The bridge between the address and the actual start of the backswing.”

He doesn’t see it as optional and teaches that it is a way for a minny practice swing, and even calls it a “dry run” for the swing to come.

As with the rest of the swing, he believes that the left hand (left hand and arm for the full swing) should control the waggle.

He even cautions not to “groove” your waggle. He thinks it must be instinctive and unique to each shot you intend to play.

The order of movement for the backswing is as follows, hands- arms- shoulders- hips. Below I’ll show one of the excellent illustrations from the book to illustrate the point.

Other fundamentals he pays particular attention to:

The body is swinging the arms like a “pendulum of a clock”. Elbows tightly glued to your side the entire time. You will eventually want to progress all the way into a full backswing and follow through.

Lesson 4: The Second Part Of The Swing

I want to include this quote that begins this chapter before I give you his downswing philosophy.

“One of the greatest pleasures in golf- I can think of nothing that truly compares to it unless it is watching a well-played shot streak for the flag- is the sensation a golfer experiences at the instant he contacts the ball flush and correctly.”  Amen

Downswing: “The downswing is initiated by turning the hips to the left. The shoulders, arms, and hands- in that order- then release their power. The great speed developed in this chain action carries the golfer all the way around to the finish of his follow-through.”

I think this is an excellent way to think of initiating the downswing, but the detail that governs the backswing and downswing is the notion of the plane.

He wants you to be brushing up against, but never over, the plane on the backswing, and executing a slightly shallower path on the downswing into and through the ball.

The downswing plane should also point slightly right of the target.He uses illustrations of a large pane of glass with a hole in it for your head to give a perfect visual representation of the plane.

His stated goal for this chapter: “In this final chapter we will be putting the whole swing together as we review these modern fundamentals of golf.”

This section is pretty much as you would expect. He hits the main points in the prior four lessons, along with other notes, stories and thoughts on golf and the golf swing.

He gives us a bit of a biography of when he took up golf and the important aspects of the swing he learned along the way, as well as who he learned them from.

I found and find this book thoroughly enjoyable to read. I’m on at least my third go-around.

I’ve completely adopted his method for executing my grip and stance. I’m learning the posture and the backswing as I write. It will take a little effort to fix 25 years of haphazard fundamentals.

I hope you find this review useful, and I really hope you pick up this book. It’s the best-written instructional on the golf swing that I’ve seen.

If you’re so inclined, you can check out my reviews of the excellent irons and wedges from Ben Hogan Golf:

The Icon Irons cater to legit single digit handicaps that are used to playing blades. These irons are no joke.

EDGE Irons are the one and only mid handicap irons from Hogan and hit like a dream.

Equalizer Wedges are now the only wedges from Hogan. The TK wedges have been discontinued.

PTx Pro Irons are my personal favorites. They too, are serious player irons but have more forgiveness than the Icons. I loved my experience with them.

I hope you enjoyed my review of Ben Hogan Five Lessons. Please allow me to point you to a couple other reviews of products I sincerely believe will help your game.

The first is a training device I sincerely believe will help cement the Ben Hogan fundamentals into your game on my PlaneSwing golf swing trainer page.

I think it’s an awesome device and company and is run by a super nice guy- Tony Clark- that stands behind his products like nothing you’ve seen. Seriously, check it out.

It combines a state of the art GPS for accurate yardages for shot to shot intelligence with monitoring and tracking capabilities.

I think it’s a game-changer, especially for those of us that like to dive into numbers a  bit.